Boasting compelling melodic arrangements filled with catchy hooks and ear-pleasing style, the new album is likely to land on more than a few “Best-of-Year” lists.

Summer Was a Day – the new album’s opening track – is resplendent with atmospheric vibes, tasteful acoustic guitar touches and hypnotic rhythms. Its follow-up is first-rate hit single Lost Weekend, an indicator of the strength of the album.

Tracks like “She Was Weird” are pop-flavored and multi-layered, exuberant and infectious.

You’re also sure to love Yorn’s vocals as he evocatively sings “Seen you at the bus stop waiting” on the softly upbeat “Halifax.”

Guitarist, drummer and songwriter Yorn was born in New Jersey, moving to Los Angeles after graduating from Syracuse University in 1999. His performances at L.A.’s Cafe Largo earned him a following and may have scored him his signing with Columbia Records during that time. Soon after, he was hired to score all the music for the film “Me, Myself and Irene.”

Yorn is a multi-talented musician, playing acoustic, bass and electric guitar on Summer Was a Day as well as electric piano and synthesizer on other tracks. 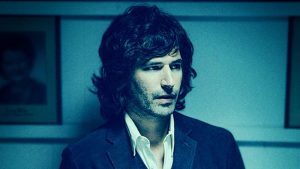 On Capitol Records, the new album has a sound not to be missed.

That must be owing to what took place in the studio; tracks were engineered at various L.A. locations while most were mixed at The Living Room – which The Shins have also used – by Kennie Takahashi, who has also worked with The Arcs, The Shins, Red Hot Chili Peppers and The Black Keys.

Currently on KRVM’s playlist is Yorn’s winning and breezy I’m Not the One.

You’ll dance to Yorn’s drums on Screaming at The Setting Sun, but other more subdued tracks – like Roses and Shopping Mall – are equally commanding.

Yorn is touring in September to promote the new album; he doesn’t yet have a show scheduled for the Pacific Northwest, but you can catch him in Las Vegas and Austin or check for additional show dates here.

You can find music by Pete Yorn on his website and on iTunes.