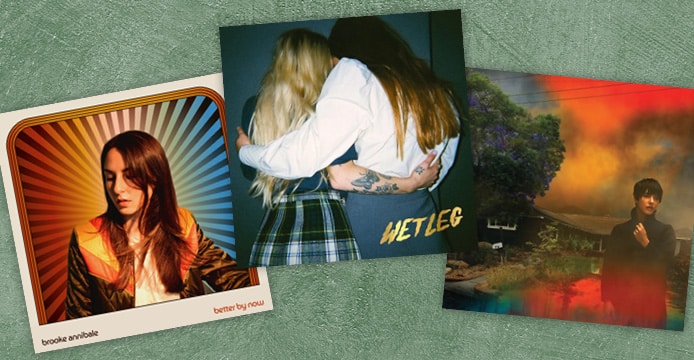 In the mood for fresh new voices that may have not yet caught your ear? Look no further than these three musicians whose works merit more attention.

Musician Brooke Annibale is an artist to watch! A songwriter since the age of 15, she has 4 albums to her credit.

The artist’s fingerpicking and smooth, endearing vocals have earned her a following. Her critically acclaimed “The Simple Fear” (2015) was filled with lovely, compelling compositions.

The album also led to continuous touring with artists like Rufus Wainwright and Josh Ritter.

“Better By Now” is typical of her alt-rock style that digs deep.

This year, Annibale released “What if You,” a powerful, beautifully arranged alt-rock track sure to entice. Have a listen:

Currently touring in both the U.S. and abroad, her new album “Better By Now” is due out Sept. 30. Watch for it.

If you haven’t yet heard of Wet Leg, you’re missing out.

Wet Leg are Rhian Tesdale (29) and Hester Chambers (28), two young women with sharp punk-music instincts. Based in the UK, this fun Brit-Pop band is earning accolades from far and wide.

Released this year, their self-titled debut entered charts in the U.K. at #1.

All twelve tracks are punchy, musically tight and engaging. Our favorites from the rhythm – guitar duo include their sassy “Angelica” and playful “Being in Love.”

The band is currently touring with show stops scheduled in Dallas, Phoenix, Seattle and a host of other cities, including Eugene.

They perform at Eugene’s McDonald Theater in October. Be there!

An album receiving rave reviews is Sharon Van Etten’s powerful “We’ve Been Going About This All Wrong.” Van Etten is an example of the many talented women artists who go unnoticed or ignored by music outlets like Rolling Stone magazine.

Van Etten cites Ani DiFranco as a key influence: “She was the first musician I had ever heard whose songs were super confessional,” says Van Etten. “She could really play guitar. That was my first experience with non-pop female musicians,” she adds, “she made me want to start playing more.”

Tracks are meticulously recorded, and each one bears a perfectly crafted message. Whether talking about the challenges of motherhood (“Home to Me”, “Far Away”), or referencing a new era (“I’ll Try”), Van eaten gets her messages across with musical finesse.

“I’ll Try” is my favorite track this year.

Van Etten is currently touring with an upcoming show stop in Albuquerque. The tour then moves on, with shows in Australia and New Zealand.

We think Van Etten may be headed for a Grammy. You can find Van Etten’s music on her website.