In need of some good vibes? You’re in luck.

With seven albums to their credit, the ever popular four-member band from Isla Vista, California, are adored by fans for their positive lyrics, smooth Jamaican sound and artful arrangements.

“Falling into Place” – their fifth release – was a beautifully produced Reggae-rock album that helped some fans recover from their 2016 election blues.

“Free Rein” – released last year – “really came from the heart,” according to Eric Rachmany, the band’s lead singer. Rebelution’s popularity is largely credited to Rachmany’s vocals and musical finesse. According to the band’s website, songs from “Falling into Place” were partly influenced by Rachmany’s “inspirational trip to Jamaica,” where he did some of the writing.

From that album, standout tracks included the colossal “Know It All” and the gently powerful “Breakdown.”

Here’s the band performing live at the Greek Theater in Los Angeles:

The band’s “Courage to Grow” debut was named iTunes Editors Choice for Best Reggae album and is one of the most downloaded reggae albums on iTunes.

Rebelution received a Grammy nomination in the “Best Reggae Album” category for “Falling Into Place.” And they’ve headlined and sold out both Red Rocks and the Santa Barbara Bowl.

They’ll be performing at the Cuthbert on Friday, June 28th.

A band loved ’round-the-world, you won’t want to miss them! 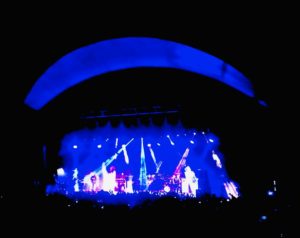 Above: Rebelution playing the Cuthbert to an enthusiastic crowd in 2015.